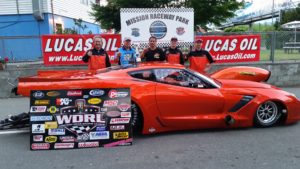 Saskatoon Saskatchewan’s Mike “Gonzi” Gondziola has taken his second DoorWarz in as many years.  Two in row is a first for this prestigious Western Canadian door car race. Go to the best and play with us echtgeld bonus ohne einzahlung. A big bonus for everyone who came!

Gondziola, running his new for 2016, 2014 Corvette Pro N20 Pro Modified had a great weekend, with setting the fast time, 5.85 and getting the number 1 qualifying position.  With a number of teams and runs in the 5’s all weekend, Gondziola had to work harder than most.

In round one of qualifying, The Corvette ran a impressive 5.85 @ 244 mph pass to set the bar for all, but it didn’t come as planned, as his chutes deployed but did not fill out and so the car made an unexpected entrance to the sand trap at the end of the strip.

The car, with minor front body damage, was fine to continue and Gondziola made his way through four rounds of competition to face Tacoma Washington’s, Garrett Richards in the final.  Richards was on a solid pass but the car got away from him and crossed the centerline and handed the win to Gondziola.